Shopping Cart
Your Cart is Empty
Quantity:
Subtotal
Taxes
Shipping
Total
There was an error with PayPalClick here to try again

Thank you for your business!You should be receiving an order confirmation from Paypal shortly.Exit Shopping Cart

« Back to The Imperfect Blog « Older Entry | Newer Entry »

This week is very tough on me, on a personal level. I imagine if anyone of you reading this is even half the space nut that I am, this week is a week of remembrance for you, as it is for me.

Today marks 50 years since the tragedy of Apollo 1 that claimed the lives of American astronauts Gus Grissom, Roger Chaffee and Ed White. 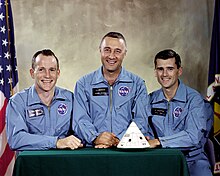 Fifty Years! 8 years before I was even born. Yet I feel such a real connection to the deaths of Grissom, White and Chaffee. And, unlike tragedies that would follow, this one happened on the ground, during what was supposed to be a routine test! Tragedies happen every single day. But this was different. This wasn't supposed to happen. Not like this. Pilots don't die on the ground. They may die crashing INTO the ground, but they don't die during what was, most simply put, a systems test!

And yet they did just that. A routine procedure gon awry claimed the lives of three American heroes...on the ground. The investigation that would follow suggested that the three did not die from the fire, but rather from the inhaled smoke and sudden lack of oxygen or the pressure differential created by the fire sucking up the oxygen in the cabin. Whatever they died of, it should not have happened. But, as many astronauts in the early space program would suggest, "Go Fever" got the best of them. And took the best America had to offer from us.

This "Go Fever" was not unlike what would happen decades later, as the first tragedy of the shuttle era would rock America at her very foundation.

Tomorrow, January 28th, marks the anniversary of the 1986 Challenger disaster. Unlike shuttles before or after, Challenger was special in that it was to carry American teacher Christa McAuliffe into space. I don't know that it's ever been stated in this way, but my personal opinion is that the objective of taking a civilian teacher into space was very much a publicity stunt, designed to get children (and the public at large) interested in space once again. Unlike in the 1960's, the space program was purely an Earth Orbit system. There was no moon rocket left. There was talk of going back to the moon, or to Mars, but there was no vehicle readily available for that task. Despite technologies from 20 years prior being sufficient to get us to the moon, we found ourselves in the 1980's locked in what had become (to the public anyway) routine.

So, on the morning of January 28, 1986, Columbia lifted off, teacher in tow, in the hopes of reviving the dreams of John F. Kennedy and those Mercury Astronauts that had paved the way before them.... and then it happened.

The Challenger vehicle exploded little more than a minute into her launch. Investigations blamed the cold weather, the "O-Ring" seals and yes, "Go Fever" among other things. Some people claimed that at least 4 of the 7 astronauts may have survived the initial explosion, only to be killed by the suicidal crash into the ocean. 31 years ago tomorrow, America suffered a second great tragedy. Unlike Apollo 1, I was born by this time. I was, in fact, a 12 year old boy who'd faked being sick that day so that I could stay at home to watch the launch. Perhaps she knew I was faking, but my mother resigned me to my bedroom that day. That is until my dad's cousin called to tell her the shuttle had exploded. At that point, she called me into the living room. She didn't let me watch it launch (I've heard reports that it wasn't carried live anyway, but I wouldn't know for sure.) but she was going to let me watch history. Some parents today would have derided my mother for her decision to let me share in a historic tragedy, but I love my mother for it. I learned something about grief that day. I learned something about NATIONAL grief that day. About grieving as a nation. Something I'd had a glimpse of a few years earlier when John Hinkley made the attempt on Ronald Reagan's life. A nation rose in prayer on that day, and that same nation bowed its head, cried as one on that fateful day in 1986. Child and adult alike. One Nation Under God...Something, in my opinion, I think we've lost amid the political and racial divisions of the last few years. It is my hope that it will not take another tragedy to once again unite this great land.

February 1 marks another tragedy in the space program, as we mark 14 years since the disaster that claimed the lives of 7 more astronauts, when Space Shuttle Columbia broke apart on re-entry. Unlike the Challenger disaster, Columbia had successfully launched into Earth Orbit. However, it was discovered that a piece of FOAM INSULLATION likely broke off during liftoff, causing a hole in the wing that would ultimately spell doom for the unsuspecting crew of seven. Joining 5 Americans were Indian astronaut Kalpana Chawla and Israeli Ilan Ramon.

As this was the first shuttle accident in the Post-9/11 era, suspicion ran wild that terrorists targetting the Israeli astronaut (or even Pakistani terrorists singling out India's Chawla) were behind the events that led to the orbiter's breakup. Those beliefs were squashed relatively quickly with the discovery of the foam piece that had apparently damaged the orbitor in such a way that there was no safe entry possible for the seven doomed astronauts.

Below is a list of some (possibly all?) of the tragedies suffered by both NASA and the Soviet/Russian space program. I guarantee most of you have never heard of most of these.

Space travel carries with it immense risk. As we learned with Apollo 1, Challenger and Columbia, those risks include loss of more than machine. They include risks to human lives as well. A round-trip to the moon (By 1960's standards) took about a week or so. A round-trip to Mars will take 6 to 9 months, depending on where they are in relation to one another at the time they are planned. Given current technologies, it might be possible that we can shave a little bit of time off that, speeding up to allow us to reach Mars orbit within 3 to 5 months. But the amount of engineering it will take is, for lack of a better word, astromomical.

But, let's be honest. Gus, Roger, Ed. They wouldn't want us to quit. They understood the risks to human lives. They stood up to be counted and said "I'll go. I'll take that risk." So, too, did the crews of Challenger and Columbia. A teacher, an Indian, An Israeli, an Asian, 2 black men, white men, Women. They went to show that space travel is not an American duty. It is a duty of all the citizens of Planet Earth. Like the plaque Neil Armstrong placed on the moon says, "We came in peace for all mankind." Well, we need to go in peace for all mankind. And ALL mankind needs to go. Everyone from the best America has to offer to the newly-annointed members of the Chinese space program, to JAXA in Japan or the European Space Agency. We all need to go. We all need to go for everybody that can't go. I'm disabled. I have a shunt in my head and a very bad back. I can't go. I'm not healthy enough. I'd never withstand the rigors of space travel. But someone must go. Perhaps someone reading this. Or perhaps your son or daughter will go. If they want to go, let them go. Encourage them to go. Because someone should go. If only to represent those who died in the attempt to go, or those who, like me, will never be able to go.

We went in peace before. We made it to the moon with less technology than you have in your cell phone right now. So why can't we go now? Like the saying goes, "If not us, who? If not now, when?" The ghosts of those who died call to us from the stars. Let us go and touch those stars. Let us reach out with the same American spirit that led us to the moon.

Let nothing stand in our way...

Until next time, this blog is brought to you by the letters W, E and H and by the number 2.

Oops, you forgot something.

The words you entered did not match the given text. Please try again.

One Month
by EHancock2 | 5 comments